The Science of Taste: Industrial Hygiene and Food Flavorings 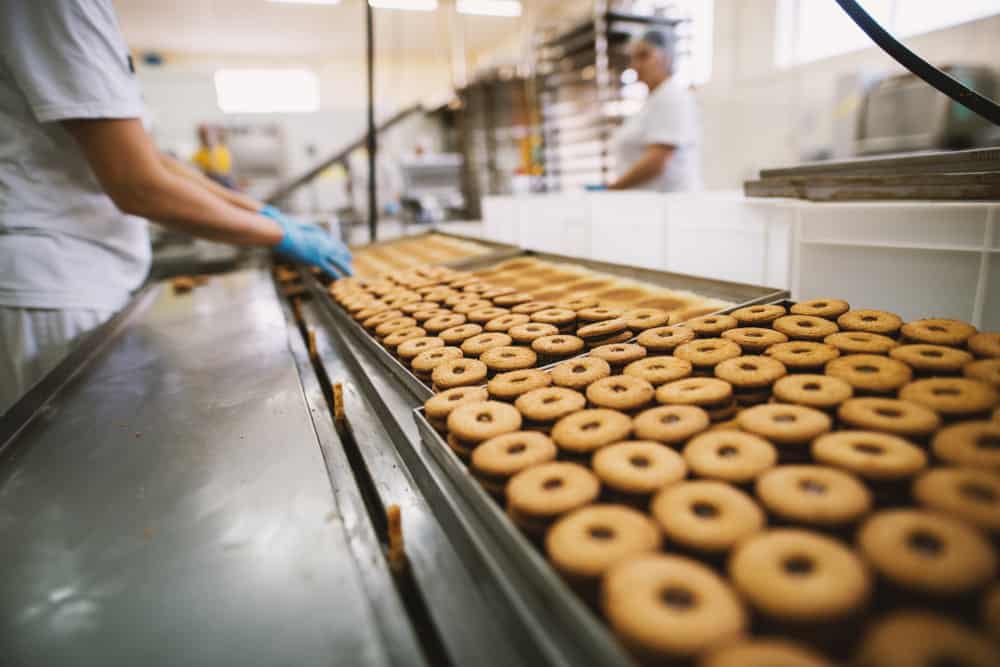 The use of flavorings in food production has greatly increased over time, due to the many advantages these compounds provide. When I wrote this post, I took a look in my home pantry, and observed natural flavors or artificial flavors in all sorts of cookies, crackers, cakes, and other packaged items. I also observed the notation on many flavored products, including beer, coffee, and tea. A smattering of these labels are shown below:

The words I was looking for were “Natural Flavors” and “Artificial Flavors”. These ingredients are quite common in the food we eat. None of what I found was surprising. I have collected hundreds of personal breathing zone and area samples in dozens of food facilities for a litany of products. Flavorings are an essential ingredient in much of the interesting variety we expect in modern food. The amount used in each product is usually less than 2% of the total product (per the label). In reality the usage is significantly less, most often several pounds added to a batch of several tons (per my experience). In all cases these these ingredients are approved for consumption. Many people enjoy a honey graham cracker, a bag of microwave popcorn, or a pumpkin spice coffee from time to time, which present no risk (with some exceptions).

But behind each product is a worker that isn’t exposed to one cookies’ worth of flavoring, but potentially the flavorings in all the manufactured cookies. Instead of a tiny droplet, this person handles gallons and pounds of concentrated flavoring on a daily basis. What about that worker? What are the hazards that potentially can be encountered by daily flavor handling? The concern with flavor compounds, as OSHA says in its Safety and Health Bulletin, is “that even though a flavoring is considered safe to eat, it does not mean that the flavoring is also safe to breathe or handle in occupational settings.“

Artificial and Natural Flavorings – What is in a Name?

“Every chemical substance, whether natural or artificial, falls into one of two major categories, according to the spatial characteristic of its form. The distinction is between those substances that have a plane of symmetry and those that do not. The former belong to the mineral, the latter to the living world.”
“Oeuvres de Pasteur”. Book edited by Louis Pasteur Vallery-Radot, Vol. I, 331, 1922-1939

The Food and Drug Administration (FDA) defines flavorings in 21CFR101.22 in the following manner:

Artificial Flavor or Flavoring – ” The term artificial flavor or artificial flavoring means any substance, the function of which is to impart flavor, which is not derived from a spice, fruit or fruit juice, vegetable or vegetable juice, edible yeast, herb, bark, bud, root, leaf or similar plant material, meat, fish, poultry, eggs, dairy products, or fermentation products thereof. “

The distinction between artificial and natural is often significant to consumers. Many people prefer what they believe to be natural to something that they perceive to be concocted in a laboratory. To the industrial hygienist, however, there is little difference between the two. Chemicals are chemicals, regardless of their origin or means of production. OSHA also doesn’t distinguish between the two in its guidance, instead typically referring these compounds as “flavoring substances”.

Vanilla – Different but the Same

“In the dark beside me, she smelled of sweat and sunshine and vanilla”
John Green (2008). “Looking for Alaska”, p.23, Penguin

There are literally thousands of different chemicals that combine to replicate the flavors that we are familiar with. Vanilla for example, tastes the way it does because of vanillin (a phenolic aldehyde with the formula C8H8O3). There are multiple sources of vanillin available. These sources include tree bark, coal tar, plant oils, bran, or by steeping vanilla bean pods.

Manufacturers produce Artificial vanillin from non-food sources (pretrochemical or pulp and paper waste). However, vanillin prepared from rice bran (which is an edible food product) is a natural flavoring. “Real” vanillin extracted from the bean pods is also natural. All three forms contain vanillin as a primary ingredient and are functionally the same. The main difference is in the price, as the artificial version typically costs cents an ounce, while the real bean extract can cost upwards of ten dollars an ounce.

Butter Flavorings – The Tip of the  Iceberg

“A Man’s Bread and Butter is Only Insured when He Works for It”
Marcus Garvey, Jamaican Political Leader﻿

The focal point of this article won’t be vanillin. Rather, we will begin discussing diacetyl and artificial flavorings, which are quite common in many food sectors. There are hundreds, perhaps thousands of chemicals that are utilized to manufacture food flavorings, so to simplify, we will focus on the most infamous of these chemicals.

Of course, natural butter as shown in the picture above isn’t the focus of this article (though natural diacetyl does occur in butter). Rather, the subject is the added chemicals that impart a characteristic butter flavor to foods. The most well-known of these is diacetyl (primarily from the health concerns of microwave popcorn facilities). Companies have made efforts to reduce their diacetyl usage, and have switched to other, similar compounds such as 2,3-hexanedione, 2,3-pentanedione, and acetoin. There are other butter-type compounds as well, but these are both the most common and those that can be easily quantified by OSHA 1012 and OSHA 1013 (the referenced analytical methods).

One characteristic that stands out regarding the shown exposure limits is their magnitude. The ACGIH TLV for diacetyl is 0.01 ppm (or 10 ppb!). These are low numbers, and it doesn’t take a significant quantity of handled material to reach them. The primary concern with these ingredients is lung damage (the microwave popcorn workers experienced a disabling lung disease called bronchiolitis obliterans).

” Everything I discovered was new and most of it was really valuable.”
Alice Hamilton, American Physician and Industrial Toxicology Pioneer

The first step to determine if these flavor compounds are actively in use it to review information for the chemicals in use. Let’s look at the ingredients of the tea I am drinking as I write this article:

What is in natural eggnog flavor? And what other natural flavors are in the tea? A google search locates one such flavoring that contains propylene glycol (helps distribute flavoring evenly), vanillin (vanilla flavor), benzenemethanol (or benzyl alcohol, used as a flavor enhancer), and ethyl propionate (a chemical with a pineapple-like odor). One would also expect some sort of butter-type flavoring (perhaps part of the “other natural flavors”). Eggnog isn’t a one note flavor like vanilla, after all. As the manufacturer, companies are often privy to additional SDS information that shows more detail in ingredients.

A Quick Aside – SDS Sheets for Flavorings

The information contained within SDS sheets for these compounds can often be notoriously lacking. This is often due to the following:

Instead, you will often find a very vanilla (pun intended?) warning on the SDS.

The above warning is from an artificial butter flavoring SDS obtained through an online search. It lists the various acids (propanoic and formic, acetic, formic, butyric) contained within the material, but does not identify the referenced “volatile flavoring chemicals”. In reality this compound could several additional compounds, including diacetyl and 2,3-pentanedione.

Typically a good practice is to look for flavors with descriptors that suggest the presence of these flavors (dairy, buttery, “brown”, etc.).

Once the potential presence of artificial and natural flavorings has been identified, it is next recommended that employers measure the workplace exposures. After all, just because something contains a flavoring chemical does not necessarily mean it is hazardous. This assessment is best completed by collecting personal breathing zone and area samples. A summary of the two discussed methods is shown below.

There are limitations in each method that impede its effectiveness. OSHA 1012 affords a great detection limit, but can only return results for acetoin and diacetyl (whereas the common diacetyl substitutes 2,3-pentanedione and 2,3-hexanedione cannot be measured). OSHA 1013/1016 can quantify all four flavors, but at insufficient detection levels. Sampling for maximum volume at the lowest flow rate yields a detection of 31 ppb (for diacetyl) over 180 minutes, well above the TLV (10 ppb) and well below a desired 480 minute sample.

These types of methods require some creativity when constructing a sample plan. If you sample for too long you risk breakthrough. Lower sample volumes will result in detection limits well above the applicable limits.

Another issue with this method is the type of media. Those tubes are glass! Glass and food never go together (all food facilities have strict protocols prevent such material from entering their floor). As such, one should take the necessary precautions to minimize the potential of contamination. First of all, the method recommends a foil wrap to prevent ultraviolet degradation. Second, a Type D tube cover is extremely helpful in keeping the glass within the sample train and not on the ground or in the food. Though I try to avoid it, area sampling is also a definite option for quantifying the background air concentrations of these flavorings in a safe manner.

Also, I highly recommend sampling pumps that display the back pressure, as the method does push the upper fault limits of most pumps.

“The results you achieve will be in direct proportion to the effort you apply.” Denis Waitley, American Motivational Speaker

Once you have received your samples results, you should obtain some insight as to what specific types of flavorings your workers are handling at your facility. Elevated results, particularly for diacetyl and 2,3-pentanedione (but others as well), mean you’ll need to consult the trusty hierarchy of controls.

So for a sampled task where the concentration of diacetyl exceeded the recommended exposure limits, one could consider the following:

The flavoring chemicals in food are an emerging issue that likely is not going to subside. Manufacturers will need to assess their employees to ensure that dangerous concentrations of the chemicals are not present in the workplace. Even though OSHA does not regulate most of the chemicals, injured workers, expensive lawsuits, and consumer distrust are not small concerns.

The costs associated with ignoring these hazards can be extremely harmful to not only the employees, but the organization as a whole.

The takeaways from this article should be:

There is no need to fear these common food ingredients. A baseline determination can help you understand the exposures of your workplace so that you can implement the proper engineering controls and personal protective equipment on your facility floor.