Ventilation is inherently linked to personal breathing zone concentrations of contaminants.  These engineering controls are quite costly to deploy, so in nearly all cases, the presence of such equipment suggests the potential for high exposures.  Unfortunately, often maintenance of such equipment is neglected, either through lack of time or expertise.

A typical ventilation system is composed of five components (moving from the employee backwards):

Hood – This is the device that delivers the pressure differential to the employee, and is often shaped/oriented to provide the best protections.  For a large dip tank, this would be a slotted hood, capable of providing a uniform airflow a desired distance from the hood, whereas in a laboratory setting, the hood would include a sash for splash protection and monitored inflows to ensure that created airborne contaminants cannot escape the enclosed hood.  Issues that could compromise hood designs include:

Ductwork – This is the means of transporting exhaust from the generation point to the employee.  Most often this is of circular/steel construction, but depending on applications it can be oval/rectangular and constructed of plastic or other materials.  Common issues observed with duct work include:

Fan/Blower – This is the means of creating a differential pressure at the hood and across the media to move contaminant laden air from the source to the treatment location.  Most often these devices will be belt or direct-drive centrifugal fans (blowers), but also includes such devices as in-line fans, axial-type fans, etc.  An improperly functioning blower could be a result of one of the following issues:

Supply Air – This is often over-looked in ventilation systems.  Supply air is fresh air that is introduced at a location where exhaust air is being removed.  Without this replacement, a facility can develop a significant negative pressure (noticeable when man-doors are difficult to open) which can greatly reduce the efficiency of control systems.  Locations with improper supply air introduction can develop the following symptoms.

These are but a few of the commonly observed deficiencies noted within industrial ventilation systems.  Often problems with worker exposures and indoor air concentrations are a result of a number of these factors working in concert with one another.  Ventilation systems are costly to install and operated.  Be sure that your system is working exactly as it should. 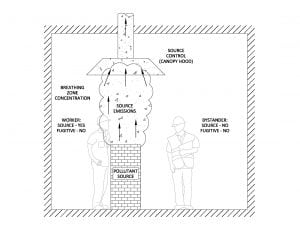 Figure 1 – Canopy Hood over a Source

In the figure to the right, is a properly functioning canopy ventilation system. As can be seen, the weakness in this system is that contaminants are drawn from the source through the employee’s breathing zone as they are collected by the hood. Typically such a system is best utilized where employees are not in proximity to the source. 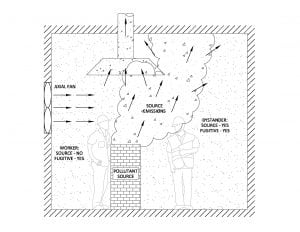 In the orientation shown in the figure to the right, a fan has been located in a manner that the source is pushed away from the breathing zone of the employee working at the station. Axial fans can disrupt the normal capture of a hood such as a canopy, potentially pushing the source contaminants into the breathing zone of nearby employees. The fan negatively impacts the capture efficiency of the canopy, thus introducing a fugitive concentration of contaminants into the room that impacts all employees. 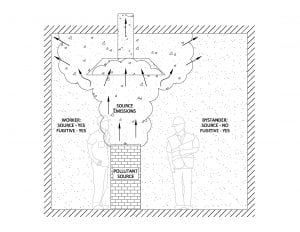 In the final example shown to the right, the flow of the canopy system is insufficient to remove the quantity of generated contaminants at the source. In this instance, a portion of the source contaminants escape capture and are introduced into the surrounding air as a fugitive emission, impacting the breathing zone of all employees in the area.

All three of the above examples show various weaknesses that can be exhibited within a ventilation system.  Figure 1 shows a canopy hood deployed in a situation that does not protect the worker from the generated source.  Figure 2 shows the impacts of axial fans on the operation of an exhaust hood, and the generation of fugitive concentrations.  Figure 3 shows the impacts of insufficient flow on fugitive concentrations.

In addition to direct ventilation measurements.  It is also possible to detect areas with under-performing ventilation indirectly, through real-time root causes assessment and background contaminant mapping.  A recommended approach is to assessment a system from multiple angles, to fully quantify the best corrective actions. 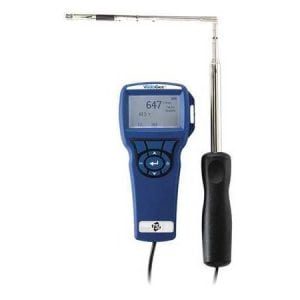 Insight IH Consulting is experienced in working with a multitude of ventilation systems.  We have staff that have been schooled in Mechanical Engineering, with experience in ventilation assessment and design.